On Monday I had the joy of taking my cousin to his very first spin class. My favorite spin instructor adjusted her schedule and is taking over Monday classes for the remainder of the month. The class itself was intense – the room was way too hot and she had us working hard which led to a lot of sweating. My cousin was in a little over his head but I enjoyed myself. 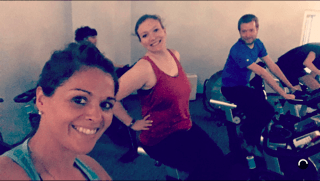 I was excited to have my new FitBit. I had wondered if my FitBit Charge had been tracking my heart rate appropriately during classes and using my new FitBit Alta HR showed me that I was right. I was in the peak heart rate zone much longer than I was with my old FitBit, so I like that this one seems to be more accurate. I also need to figure out what I can do to get my heart rate more under control – I don’t think it’s right that it’s at the max for as long as it is. 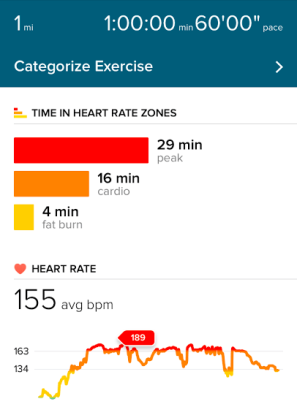 On Wednesday I went to spin again. I wasn’t super in the mood to be there but I did the work and made it through. It’s interesting to compare the data on the FitBit because you can clearly see that I wasn’t as interested.

This was another lazy week for exercise although I’m glad I made it in twice. I may or may not go to the gym on Sunday, but I’m thinking that I should and that weights would be a good idea.

Goals for next week include three trips to the gym during the work week and calorie tracking.

Did you do anything fun for exercise this week?